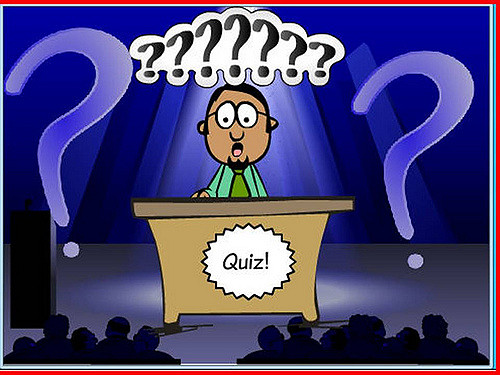 IT Quiz Questions and Answers by Nandulal from Wayanad. Thanks a ton for this share Nandu


Category : Bulk mode questions
Round : A

6.Identify these personalities?.what is the speciality of these fellows
* Aron greespan
* poul seglia
*Tylor vinglevos
7. Identify these persons and their innovation
*Evan Williams,
*Noah Glass,
*Biz Stone
8. Who is Larry ?.how he is related to twitter?
9. Which techy genius is known by the name “connected human”?
10. Sachin tendulkar and Jackie chan are famous all around the globe.what is the common speciality of them in connection with technologies?

Answers of the first round questions with bulk mode pattern :

A1: they are widely used video editor s
A2: they are unicode malayalam fonts. Manjari is the latested one among this
A3: they are very famous variant s of malware’s ,commonly known as  ” Ransomwares”
A4: these smartphone s are waterproof!!
A5: They are famous Chatbots.Mitsuku is the most intelligent one.
A6: They are logo designers . ireena block designs android logo.Ruth kedar made Google logo. Robjan off created apple logo.
A7: these tech companies have an Indian as there CEO s
A8 : They are well known artificial music synthesiser softwares
A9: these companies have online document editors .
Google- docs
Adobe – reader
Dropbox – paper
A10 : They are Co founders of Infosys

B1: Ramesh raskar made the application for testing eyes through smartphone named NETRA
B2:  Prof. Kevin vavrik is known as Captain Cyborg . he implanted several microchips in his body and he is able to control electronic devices with simple gestures of hands,heads,eyes etc
B3: Andi Rubin is the father of Android. He founded Android.Inc
Later he and is android .lnc was take over by google.
B4: the Indian genius , Pranav mistry ,founded the gestural computing interface that is known by the name ‘ Sixth Sense’.
B5 : its Orkut boycoketen who founded Orkut,the earlier socio-networking platform which teached us the basics of  social networking.
B6 : they are co founders of facccebook
B7: they are co founders of twitter
B8: Larry is a tennis player. Twitter’s logo is known by the name ‘ Larry the bird’
B9: Chris dancy is known by the name connected human .he is just like  Kevin vavrik ,connected body wide,with google glass and another 17 + body monitoring devices .
B10: sachin tendulkar is the new brand ambassador of  Kasper sky labs .formerly Jackie chan was there in that place.

IT Quiz Questions and answers for Kerala IT Quiz