QUESTION NO: 61 What are we talking about? 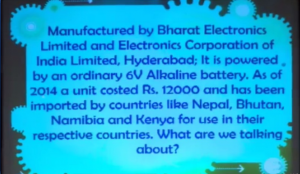 QUESTION NO: 62 Name this search engine? 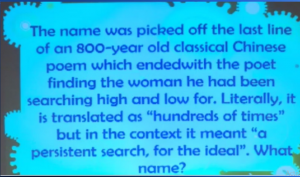 ● This is the practice of taking freelancing work through online job offers. The freelancing websites are hubs where employers place tasks, which freelancers from around the world bid for.

Some e-lancing websites act as intermediaries for payment, paying the freelancer directly after work is completed, to mitigate the risk of non-payment. Employers posting work on these websites set the price they are willing to pay for the task being done.

Name the company in this book?

● World war 3.0 is all about one company and its enemies.

Who is this Legend?

● A legend of all time, the World War Two codebreaker who later killed himself after receiving a criminal conviction for his minor crime, is granted a Royal pardon by the Queen on 2013 posthumously.

● He who helped Britain to win World War II killed himself after receiving the conviction in 1952.

● He has now been granted a pardon under the Royal Prerogative of Mercy after a high-profile campaign supported by tens of thousands of people including Professor Stephen Hawking. 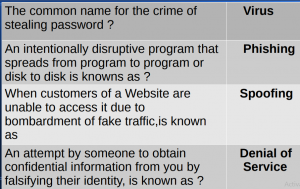 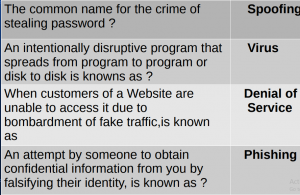 Expand MIME in the context of Internet Standard?

Which of these HTML tags should be used to display a web page within a web page?

QUESTION NO: 74 What are they?

● This is the new image format for the Web.

● This is a modern image format that provides superior lossless and lossy compression for images on the web.

● This format lossless images are 26% smaller in size compared to PNGs.

● Malicious software that Can Hold Computer Files Hostage is known as?

QUESTION NO: 77 Who gives us all these? 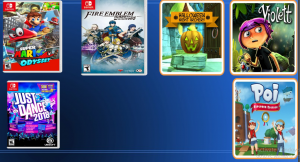 The first ever document that officially created into an e-book?

QUESTION NO: 81 Who wrote this book? 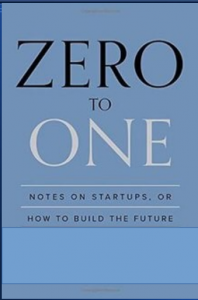 What is the significance of this map in Cyber Security? 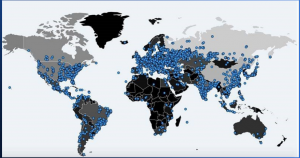 ● WannaCry or WannaCrypt ransomware has affected millions of Windows devices all over the world and is still spreading fast. A new map created to track the malware’s spread shows the status of the attacks in real time with the regions getting affected. The map tracks the attacks and updates the site periodically, as more businesses or affected individuals use their systems.

In which site this funny message comes? 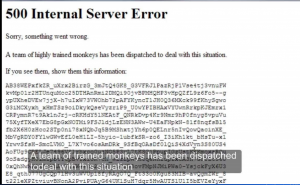 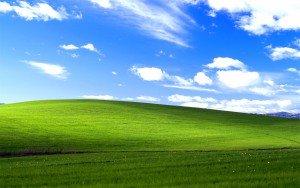 ● Bliss is the name of the default computer wallpaper of Microsoft’s Windows XP operating system. It is an unedited photograph of a green hill and blue sky with clouds in the Los Carneros American Viticultural Area of Sonoma County, California, United States. Charles O’Rear originally sent it to Corbis in 1996, and Microsoft bought the rights to the picture in 2000.

This photo was taken on the occasion of celebrating Golden Jubilee of something? 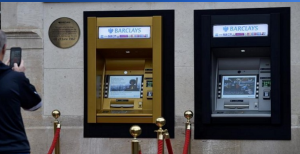 ● According to the Metro, the world’s first ATM was unveiled by Barclays at its Enfield branch in North London on June 27 1967. QUESTION NO: 86 Indian CEOs

QUESTION NO: 86 Match the below Indian CEOs 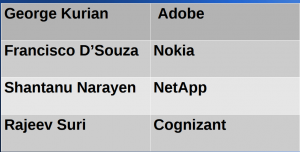 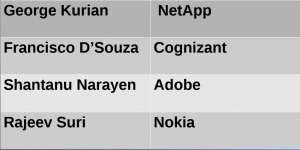 Which company’s name was decided by coin toss?

● This is an American multinational information technology company headquartered in Palo Alto, California.

● It developed and provided a wide variety of hardware components as well as software and related services to consumers.

QUESTION NO: 88 Name the Award?

● It explores the human condition of immigrants and refugees in the six-and-a-half-minute sequence. The exhibit by Iñárritu, known for directing Birdman and Revenant, is getting a special statuette “in recognition of visionary and powerful experience in storytelling”.

QUESTION NO: 89 Name the Company?

● Former ………CEO John Sculley has revealed that ……. released a concept video “Knowledge Navigator” in 1987 promoting the idea of future computer technology to which people said, “This is absurd.” The video showed upcoming technological advances, including tablets, video conferencing and the first prototype of a digital assistant. Film

What Was The First (Well-Known) Encryption Machine?

● Patented in 1918, brought into production in the 1920s, and made popular by worldwide military use (most notably/infamously by Nazi-run Germany in World War II).

● Although the Enigma code was cracked during World War II and the devices fell out of popular use over the following decade, the public remained largely unaware of the Enigma machines, the role they played in World War II, and the great lengths the Allied forces went to crack the German Enigma codes. Upon declassification of this information in the 1970s, there was a surge of interest in the devices. The majority of the remaining machines are found in museums and the hands of private collectors.

What Did The First Web Cam Monitor?

● The first webcam, like many inventions, was built to save time. Back in the 1990s, the Computer Laboratory at the University of Cambridge had a rather inconveniently located break room, known to faculty and students as the Trojan Room. In 1991 Quentin Stafford-Fraser and Paul Jardetzky collaborated to put an end to the frustration of trudging across the entire building to the Trojan Room only to find out that the coffee pot was empty. Using the X-Window system they wrote a client/server model that broadcast a simple low-resolution video feed of the coffee pot over the local network.

● Two years later in 1993 when early web browsers adopted in-line image display the camera setup received an upgrade. Daniel Gordon and Martyn Johnson connected the camera via the streaming server to the Internet; it began serving up live shots of the coffee pot at the rate of one frame per second. Although checking to see if a pot of coffee was full or not might seem like a trivial thing to modern media-saturated Internet users, the Cambridge coffee pot was one of the most visited web sites on the early Internet.

● The coffee-cam remained online from 1993 until 2001 when the computer department moved to new facilities.

What is the operational name?

● It covers India and a region extending 1,500 km (930 mi) around it, with plans for further extension. The system at-present consist of a constellation of 7 satellites, with two additional satellites on the ground as stand-by.

● The constellation is already in orbit and system is expected to be operational from early 2018.

QUESTION NO: 85 Name the firm?

● This is India’s largest branded network of hotels and operated in the budget segment of the hospitality industry.

● Headquartered in Gurugram, it currently operates in more than 200 Indian towns, Malaysia and Nepal.

QUESTION NO: 87 Softwares for what?

● A special Parliament session (on 1st July 2017) was called to validate this system.

QUESTION NO: 88 Who develop these games? 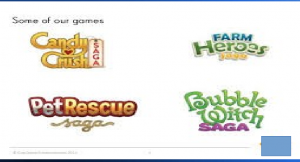 QUESTION NO: 89 Name the Award?

● These Awards presents two honors in every category—The…….Award and The ….. People’s Voice Award.

● These awards are considered as the Internet’s highest honor.

Which is the game?

● This game is a free-to-play, location-based augmented reality game developed by Niantic for iOS and Android devices.

● The game was the result of a collaboration between Niantic and Nintendo and was initially released in selected countries in July 2016.

● The game utilizes the player’s mobile device’s GPS ability to locate, capture, battle, and train virtual creatures, called ……., which appear on the screen as if they were at the same real-world location as the player.

QUESTION NO: 91 What is the controversy over these emojis? 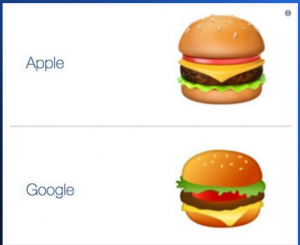 Answer Where to put cheese in burger?

● People discussed how Google’s burger emoji is placing the cheese underneath the burger, while Apple puts it on top.

● A burger with two buns, containing a meat patty, cheese, and sometimes lettuce or tomato. The official Unicode name for this character is Hamburger yet most major vendors display this as a cheeseburger.

● A single word formed as a portmanteau from biology and electronics. It is the application of biological methods and systems found in nature to the study and design of engineering systems and modern technology.

What is the significance of this song “Daddy’s Car” in the world of technology?

Answer The first pop song ever written by artificial intelligence.

● The AI system, called FlowMachines, works by first analyzing a database of songs, and then following a particular musical style to create similar compositions. The final result does have a human touch, however. In the case of both songs above, French composer Benoît Carré arranged the songs and wrote the lyrics.

QUESTION NO: 94 Something on the internet is owned by the country of Tuvalu and is an important source of income for the country. What?

● It is said to be the largest ever academic assistance program supported by the U.S.A.

● X initially started in a room in canteen building of some other organization.

QUESTION NO: 97 Identify this Great Personality?

● This American businessman has been listed as a billionaire by Forbes magazine.

● He made his early fortune as one of the co-founders of Sun Microsystems, a company which created the Java programming language and Network File System (NFS).

● In fact, Shuttleworth dedicated this hardworking attribute of beaver to the Ubuntu team: “It’s builders that we celebrate – the people that build our upstream applications and packages, the people who build Ubuntu, and the people who build on Ubuntu. In honor of that tireless toil, our mascot this cycle is a mammal known for its energetic attitude, industrious nature and engineering prowess. We give it a neatly nerdy 21st-century twist in honor of the relentless robots running Ubuntu Core. Ladies and gentlemen, I give you 18.04 LTS, the Bionic Beaver.” 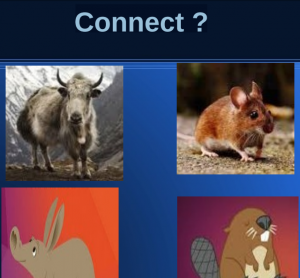